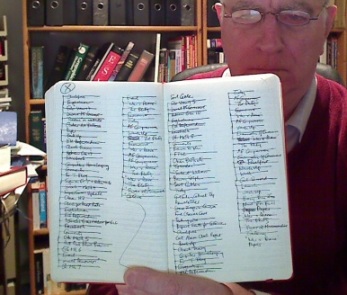 Mark Forster has retired. At least that's the official line.

Because it hasn't stopped him creating some of the most original and effective time management systems around.

In this interview, I asked Mark about his latest system, Superfocus, his other work and his thoughts on how to manage time...

Having already produced a number ground breaking and hugely popular systems, what did you feel were the missing ingredients that prompted you to develop SuperFocus?

I think the main factor that's led me to keep developing new systems is the feeling that I could do just that little bit better than the last one.

Developing systems and working with them always has the effect of sparking fresh ideas off in my mind.

With SuperFocus I feel that I have covered the main objectives which I would like in a time management system.

These include being able to write every idea I have into the system, removing procrastination (very important for me!), working in a framework which is both structured and intuitive, ensuring that I get the difficult stuff done as well as the easy stuff, dealing with urgent stuff, and being able to exercise a variable degree of control according to the circumstances.

Of all these, the last one has been the most difficult to achieve. There are times when it's appropriate to act in a more or less freewheeling way and times when tight control is needed, and SuperFocus can provide both in a way which I don't think any other time management system can.

As the Amazon reviews testify, Do It Tomorrow has been incredibly well received. What is it about the ideas in the book that really struck a chord with so many people?

I think the most radical idea in the book is the idea that you can actually identify what one day's work is. Once you have identified that you can then tell whether your work load and the time available to deal with it are matched.

So the book helped a lot of people to see why they were always behind on their work. It wasn't because they were hopeless people, but because they had taken on (or been given) too many commitments.

Is there a danger that time management books, blogs and seminars are preaching to the converted? If so, what needs to happen to reach people with poor time management skills who don’t or won’t improve them?

When I was coaching people, I often used to ask them whether there was someone in their workplace who did much the same job as them really easily and effectively. If there was someone like that (and there usually was) I'd say "Go and ask them how they do it!"

How do you manage to capture thoughts and ideas when you’re out and about without your notebook and pen?

I don't. If a train of thought has started in my mind, I can usually depend on it to resurface without needing to be written down.

You are recognized as a world-leading authority in the field of time management. What events and circumstances were the major triggers in your development?

It's kind of you to say that, though I'm not sure it's actually true.

The major trigger for me was that I wanted to work for myself and knew I wasn't well enough organised to survive without all the supporting structures that a paid job gives you. As I didn't find the existing books on the subject worked for me, I started to develop my own methods.

In your opinion, what constitutes a genuinely effective time management system?

I think a good time management system has got to achieve two things. It's got to optimise the sequence in which tasks are done, and it's got to keep the person doing the tasks in "the flow".

A lot of time management systems are good at controlling the tasks, but don't pay enough attention to the fact that there's a person doing the tasks. Since DIT, I've been concentrating on the person rather than the tasks.

For instance, my first post-DIT system was Autofocus 1 which had a very high degree of flow but was not very good at optimising the sequence of tasks. WithSuperFocus I think the balance is about right between the two.

When it comes to doing the tough stuff you have to do but don't want to do, using a system obviously helps. But to what extent do you rely on motivation and self discipline?

As little as possible!

Self-discipline is fine if you mean by it having good structures which support you in your work. But what most people mean by self-discipline is "will-power". Will-power means fighting against the basic human tendency to do the easiest thing, and sooner or later human nature will win out.

What is the difference between a swamp and a river? The water in both is exactly the same water, and in both it's behaving the way water behaves.

One of the ways SuperFocus gets stuff done is by encouraging the systematic use of the "little and often" principle. Using this, even the hardest nut can get cracked.

Everything has to have a limit. How do you recognize 'Good Enough'?

The essential factor for knowing when you've finished a task is knowing why you are doing it.

What do you currently think is the most effective way to raise a person's awareness of the importance of their personal time management?

Always hold them to account, and don't let them get away with failure to honour their commitments.

What are your own worst time wasting habits and what are you doing about them? :)

I'm tempted to reply: "I'm retired. Wasting time is what I do!"

But seriously, my worst habit is starting things and not finishing them. And what I have done about that is to design SuperFocus, which stresses finishing stuff.

Is there a pattern to your creativity? Do certain activities during your week stimulate the most ideas?

I find working a system like SuperFocus in itself encourages creativity because whenever one starts to move forward on a project ideas and opportunities start to appear like magic.

Task management is dealing with what you have decided to do. How do you approach choice management? Deciding what to do can be a tremendous time waster...

You've actually put your finger on a major feature of SuperFocus, which is that it is designed to discourage the making of conscious choices about what to do.

This was something I introduced with AutoFocus 1, where I stressed firstly that all tasks should be entered into the system without prior filtering, and secondly that the only criteria for choosing a task to work on was that it felt ready to be done.

This greatly decreased both system overhead and resistance to working the system.

I even encouraged making choices by entering opposing tasks like "Buy red notebook" and "Buy blue notebook". The one that felt ready first got done, and the other got dropped.

This greatly decreased the stress associated with making choices, and also greatly increased the chances that you would make choices you remain happy with.

Thanks, Mark, for sharing your time and thoughts so generously!